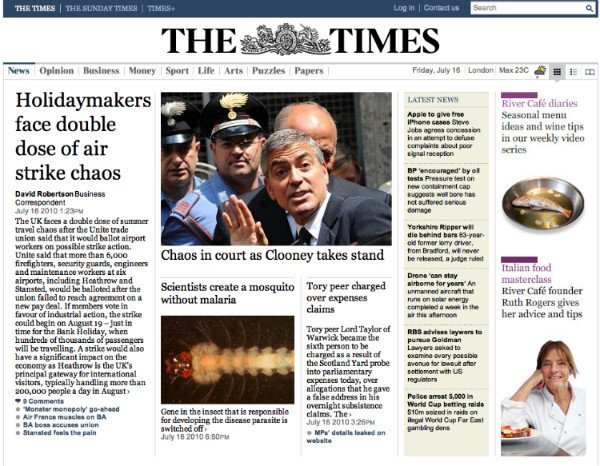 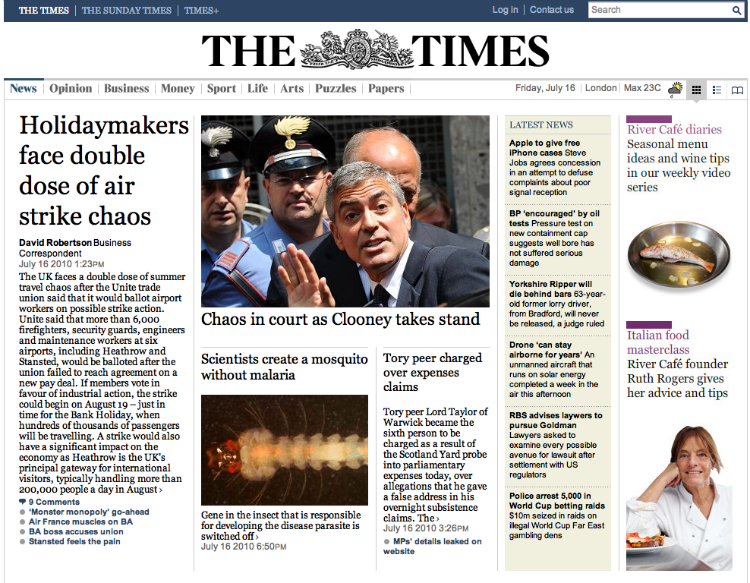 July 16th Front Page, The Times of London, but wait, there’s a levy

In a follow up to July 12th’s post Media’s two tribes – charging for content The Atlantic’s James Fallows reports The Times of London has placed their bet you will love their headlines so much you will pay for the opportunity to read the article.

Click on any link within The Times and you are immediately sent to a pay option.

“You get absolutely nothing without signing up for paid service. No first-paragraph tease (a la the WSJ), no “metered” service of so many free stories per month (a la the FT), not even any Google search results on the contents of the story. I mentioned in my “Google and the News” story that some news organizations were working with Google to be sure that their articles would still be indexed, even if behind a paywall. The Times has (I am told) worked with Google to be sure that the stories will not appear in search results, from Google or anyone else.”

Mr. Fallows references his own Google and the News piece, I recommend the read.

“Greetings … it will cost you.” The header from The Times of London

Seems this media industry experiment has only just begun, good luck to those companies, The Times, that think this will work.

Are you willing to pay for news, sight unseen?

Do you think The Times of London offers such a highly-unique perspective on news that is worth paying for?

This is worth following.  Particularly after looking at the revenue and operating income chart of one American newspaper firm, McClatchy, who own a huge amount of regional papers like:

Look at the Economist’s take on the strange survival of ink, on how newspapers have escaped cataclysm by becoming leaner and more focused.  Now that sounds like a good plan for most industries.

Update 07/23/2010:  Tall Pay Wall for The Times in the U.K. Hits Traffic Hard: LONDON (AdAge.com) — Rupert Murdoch’s experiment:  “a 2/3rds drop in the brand’s market share within the print news and media category since it began demanding registration in May and subsequently erected a tall pay wall on July 2.”

Subscribe to Email Posts and Join 613 New Friends
I believe in your privacy and will never sell or spam your email.
Media’s two tribes — Rupert Murdoch’s Wall was last modified: August 24th, 2016 by Toby Elwin