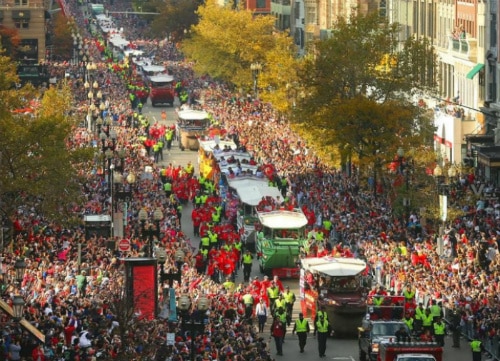 Another Boston celebration or moving vans heading out of town

This was originally posted in the nowEurope, where I post as a contributor.

CENTROPE is the integration and cooperation of the quadrangle borders between the Czech Republic, Slovakia, Hungary and Austria.

Here is the article, as originally posted:

In Boston, I recently attended the Annual VC Outlook Dinner, hosted by The Indus Entrepreneurs (TiE), the world’s largest not-for-profit organization for entrepreneurs. The evening provided a snapshot of the investment climate here in the United States. Some of these insights may apply to other parts of the world, including Central Europe.

The evening included a panel discussion and dialogue.  The panel was made up of representatives from six leading US venture capital firms:

These investors offered their views on the health of the US industry; what makes the Boston investment climate different form Silicon Valley; and the importance of talent in the investment.

Here are some panel discussion notes. These views were shared by the majority, but I provide this recap with a disclaimer that these are opinions and interpretations.

Perception may not match reality, but can influence reality.

There’s a positive correlation between the merger and acquisition market (M&A) and venture capital.  M&A deals are the primary source of liquidity.

Technology M&A deals move in lockstep with the NASDAQ.  When looking at the health of the industry, M&A trends can provide a good proxy.

There are longer time lines for deals. Where investors used to expect an exit within five years, many of the panel firms are now expecting to wait eight to ten years for an exit.

Because of this extended horizon it’s now even more critical to work with the right people. Relationships are more important than ever because the investor and entrepreneur are tied together even longer.

When evaluating an opportunity, look at the strategic importance of the deal, the size of the market, and how the team executes against the opportunity.

Look for the deal or team who had the initial market opportunity, product, technology, or idea and stay away from the second or third investments in the market.

There are a couple of reasons to look long and hard before investing in the second or third team as these trailing ideas tend to:

Despite a perception for information technology getting the bulk of VC funding, the reality is 50-60% of funding is going into Life Sciences/Biotechnology (meanwhile, Dow Jones VentureSource shows on third of all VC investments are heading into clean technology and bio technology).

The biggest opportunities are in clean tech, the mobile market, and cloud computing.  While IT still gets the investment headlines, IT is clearly not the focus for a majority of funding or opportunity.

Over the past 20 years, here in the States, four or five regional investment centers have jostled for the investment and innovation position.  The regions usually mentioned are:

Today we have a one-horse investment race. California’s Silicon Valley has an overwhelming lead in equity investment deals, and a view as an epicenter for industry-changing businesses.

As the primary destination for creative talent, California may continue to widen its lead as an innovation center. As a result, many here in the North East are casting their gaze towards Silicon Valley for first-tier deals.

Boston, Cambridge and other New England areas are fighting to remain relevant.

One Boston-based VC firm, launched in the mid-60s, first opened their Bay-area office ten years ago. Now almost two-thirds of their investments are in the Bay area.

A second VC firm mentioned quoted Bay-area deals are happening at a rate of five for every one in Boston.

The Value of Risk : East Coast vs West Coast

Failure and risk are looked at completely differently on the West coast compared to the East coast.

On the West Coast, failure seems to be viewed as a criteria for success; an entrepreneur is looked at with a sense of greater confidence as they have proven they’ve made mistakes and had a greater opportunity to learn from those mistakes.

On the East Coast, failure seems to be a red flag.

The panel’s recommendation was to look at failure, or risk, differently.  VCs and entrepreneurs could take a West coast view to fail quickly as positive.

Failing quickly costs less money and failing quickly provides opportunity for critical change. The perception for many on the panel was that the Boston investment culture looks at failure at the cost of opportunity. Failure is not the negative too many view it as.

This view from the evening VCs does not align with the findings of the Beacon Hill Institute, a Boston-based learning and research center.

Massachusetts also continues to outperform all other states in technology, as measured by grants from the National Institutes of Health, new patents, and its high tech workforce. The Commonwealth ranks first in venture capital per capita, making it, by that measure, the most attractive state in the union for startups.

It is easy to see Boston’s VC community and a Boston-based think tank have divergent views of the region. Like most due diligence, consider the source and the agenda before taking information at face value.

The Value of the Team

The most frequent comments of the night stressed importance of a strong management team. However, the panel offered little concrete advice on how to assess human capital, or how to factor a human capital variable into deal valuations.

Several investors emphasized that entrepreneurs should exit when they, the team, want to sell, not when the VC wants to sell.

As an entrepreneur you are building a company and the exit will present itself.

Don’t push for an early exit, unless you are looking to just cash out and not build a company.

What this means to the VC is that from day one of the relationship all key people need to share a vision.

When the investment management team and entrepreneur team share a vision there is a strong opportunity to make a great partnership and share in the upside.

What insights are transferable to other regions, industries, or investors?

Subscribe to Email Posts and Join 630 New Friends
I believe in your privacy and will never sell or spam your email.
Notes from Boston: the state of US venture capital was last modified: August 24th, 2016 by Toby Elwin